Misinformation About CJN’s Prosecution And The Justified Indignation Of Lawyers By: Timothy Ola Bamgboye 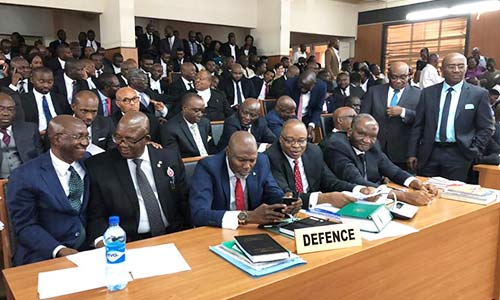 It is too early in the day for the misinformation that is being reported as news on some TV channels, namely, the purported arraingnment of the CJN, Hon Justice Mister Walter Onnoghen. A particular channel in fact reported that he was arraigned but he was absent in court! How absurd can this get.

Please, let it be known that the CJN was NOT arraigned at the Code of Conduct Tribunal on Monday, 14th January, 2019. And God forbid a SITTING CJN is arraigned in any court of law (we will come back to that presently).

For there to be a valid arraignment, three conditions must be met:

1. The accused must be present in court and placed in the dock unfettered.

2. The Charge must be read over and explained to the accused in the language that he understands to
the satisfaction of the Court.

3. The accused must be called upon to plead instantly to the charge.

In the instant case, none of the conditions was met. The defendant was not even present in court!

So, if the CJN was NOT arraigned, what happened in court? Nothing! I mean, nothing pertaining to the COMMENCEMENT of a criminal trial took place last Monday. Trial does not commence in a criminal matter until the defendant takes his plea, and arraignment is the MANDATORY process of doing so.

The right thing to report is that arraignment was stalled because the jurisdiction of the court was challenged, and the defendant was yet to be served with the charge in person. Let us know what we are reporting, please.

Now, why does it seem most legal practitioners are up in arms against this Government for ridiculing the judiciary without as much concerning themselves with whether or not there is merit in the case?

First, Due Process. In law, justice must not only be done but be manifestly seen to be done. In this wise, a breach of procedure is as critical a breach as a breach of administering the substantive law. This is moreso that it is the Head of the judicial arm of Government in question, an arm of Government with the very delicate duty of administering justice and adjudicating disputes between any and every party, including those involving the Executive arm of Government. Public perception must be well guarded. The day the public reasonably lose confidence in the good moral standing of the Chief judicial officer is the beginning of the end of our democracy.

The lawmakers have in their wisdom provided a disciplinary internal mechanism that resides with the National Judical Council. The Council is empowered to first investigate a judicial officer accused of misconduct in the course of his official duty, and if found culpable, suspend or retire him, before he is made to face trial in the regular courts.

The second reason for the outcry is Politics. Like a learned colleague posited, there are three sides to this case: the legality of it, the factual side, and the politics of it. Sadly, the Government has in its unwisdom allowed the politics of it to overshadow the two more important layers. What is with the haste? What is with the timing? What is with the desperation? A Government that is renowned for using deodorant on the corruption petitions against those of his household and using insecticide on those against his real and perceived enemies cannot reasonably deny politicising this sudden prosecution.

Nonetheless, in spite of the politics at the heart of the matter, every patriotic Nigerian including lawyers and judges, is interested in seeing this matter to its conclusion. Let this matter be pursued to its logical end. Only let due process be followed.

One last word: the fears that the NJC might sweep the case under the carpet if placed before it, seeing the CJN is the current chairman and would only have to step down for his deputy to take over in line with the principle of natural justice is misplaced. NJC is not like political parties that treat serious allegations of immoral and criminal acts as family affairs. They are well in tune with the huge moral burden that comes with the profession. It is for this reason that the reasoning of the Court is of a huge importance to a lawyer, sometimes even above the decision of the court.

Sound logic, objectivity, and correct application of law must be found in any judicial decision. It cannot be any other way. The NJC knows this. They know the whole world is watching. And they know those with the legal, and critical training like theirs are equally watching.